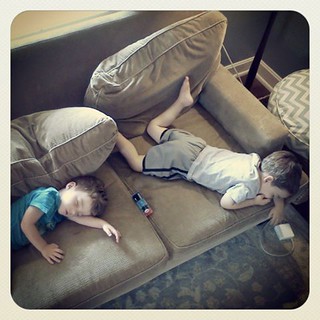 This picture was taken at 5:22pm. Sophie woke them up at 6pm. They immediately started crying. We whispered softly to them. Scratched their backs. Dinner was already on the table, on their plates, parmesan cheese sprinkled on top, their favorite drinks in their favorite cups.

And then kept screaming until 6:55pm.

Whenever I asked James what was wrong (which, obviously, was that I woke him up) he just screamed at me. Owen, at least, tried to talk although it didn’t make sense. I think he was dreaming and his dream was clashing with reality, which was just making him more angry.

Eventually, after a long story about a curvy track involving his Legos, he told me he wanted watermelon and carrots for dinner.

This was, actually, a somewhat reasonable request but I had already made dinner. And our rule is this: You must, at the very least, try a bite before requesting something else.

I reminded him of this rule.

He just screamed some more.

Finally (imagine a lot of time passing here) he decided to try a piece if I carried him to the table and if I fed it to him.

Me: “So you want watermelon and carrots?”

As I was spooning out the watermelon onto a plate …

Owen: “Wouldn’t it be funny if I ate all my pasta with my watermelon and carrots because I like it?”

I paused. And silently screamed inside my head.

He ate some more. He ate his watermelon, his baby carrots and his pasta. James, who had been eating as well, got up and came over to where I was sitting, which, at this point, was on the couch.

James: “How many bites do I have to eat to get dessert?”

Owen: “How many bites do I have to eat?”

Owen, sobbing again: “But I want to eat the whole of it!”

Owen, still sobbing: “But I want to eat the whole of it!”

At this point Sophie came down the stairs, wearing only her underwear.

Me: “Because you’ve had plenty of treats today. That’s plenty for dessert.”

James: “DID I EAT ENOUGH FOR DESSERT?”

Owen: “Did I eat enough for dessert?”

“Everybody knows how to raise children, except the people who have them.” —P.J. O’Rourke