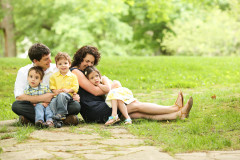 Today is Dia de los Muertos, Day of the Dead. It’s a tradition I’ve long been aware of, but only halfheartedly.

Recently the children and I have been attending First Unitarian Church of Cincinnati. It’s a good solution for our family. Andy is an atheist. I’m agnostic. I wanted something that exposed my children to many different beliefs, something that focused on ethics, morality and community. This is First UU’s mission statement: “Our urban Unitarian Universalist community celebrates and supports one another on our spiritual and ethical paths. We work for justice, dignity and respect for the web of life.”

(UUs aren’t fans of proselytizing, so I’ll stop here. Except to say that for me, it feels like home.)

Sunday we celebrated Dia de los Muertos, which is apparently a First UU tradition. Because I’m not great at reading emails, I thought only children were asked to bring a photo of a loved one who has died. Sophie, blessedly, only mourns two living things now dead—my parents’ dog, Holly, and my sister and her family’s turtle, Shane. She drew a picture. 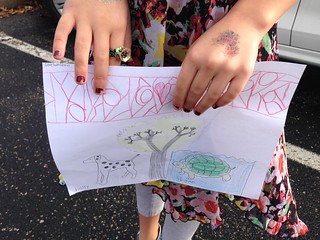 Sunday’s service, both in English and Spanish, followed the story of Rosita y Conchita, a picture book by Eric Gonzalez and Erich Haeger. Throughout the reading, the congregation was invited to bring up offerings for a deceased loved one—their picture, their favorite food, a flower and a cherished memento. For those who didn’t bring anything, candles were lit. 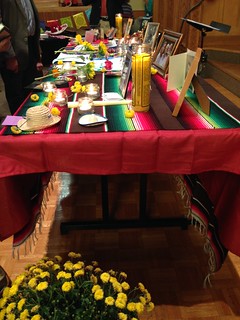 Slowly, a beautiful altar was made, filled with framed color photographs and black-and-white pictures, drawings, lit candles and so many small objects—a pear, a candy bar, single flower stems, a music box, a straw hat, a figurine. It was an altar covered in so much sweet, unspoken sentimentality I grew teary eyed for those I never knew.

Sophie took up her picture of Holly and Shane. When we were asked to bring up favorite food, I whispered to her that we should have brought lettuce for Shane. “And socks for Holly,” she said. It was a memory I had forgotten—the kids all handing my dad their dirty socks so he could stuff them in his pockets so Holly wouldn’t eat them.

I think at 36 I should be at peace with the concept of death. I’m not. But I find beauty in the many varied ways we humans acknowledge it, respect it and work our way through it.

So today I look at Dia de los Muertos differently. I think of the mementos I would place—a slice of peach pie, a small International toy tractor, a loved library book, a stuffed cat, a picture of my boys being tackled with a pillow, a ring with my name carved into it, a piece of sheet music covered in penciled-in notes, two dates written on a piece of paper, a perfectly written thank you note, a name of someone I would have loved to have met, a leash, fabric from a pair of khaki pants.

“The life of the dead is placed in the memory of the living.” —Marcus Tullius Cicero