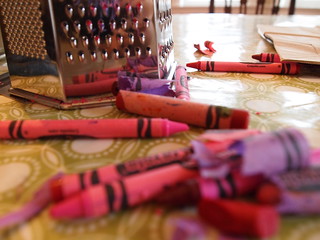 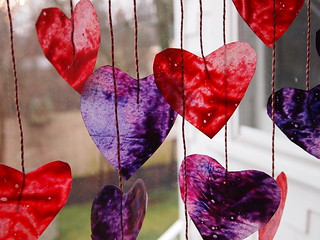 heart sun catchers made with wax paper and crayon shavings 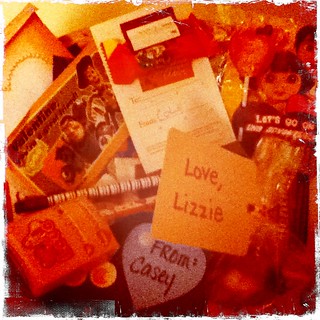 a wooden bowl full of tiny Valentines’ and candy from classmates 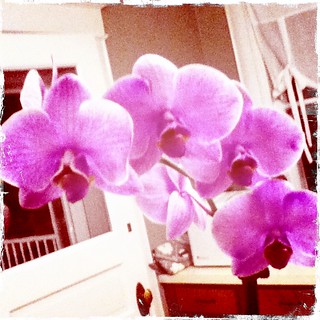 a beautiful orchid from my love

I debated whether or not to give our children something for Valentine’s day. I roamed Target’s holiday-themed aisles contemplating chocolate, small toys that wouldn’t last, yet more stuffed animals. In the end I purchased three children’s books, each with a theme of love. I’m pretty sure they would have been more thrilled with chocolate, but the decision satisfied me. Andy’s mom sent a lovely care package, filled with cards, conversation hearts, chocolate (which Tucker helped himself to) and a beaded heart necklace for Sophie. My mom sewed large, plastic, Eric Carle placemats for each grandchild (more on that later).

After Andy and I put the kids to bed we ate tiramisu (which Andy picked up at a nearby restaurant while I was finishing putting Sophie to sleep), drank too much champagne and watched Downton Abbey. Before I kissed Sophie goodnight I asked her about Valentine’s Day. I asked her about love. She was mostly excited about the wooden bowl full of candy and cards sitting on our kitchen island. But I think she knows. We play a game, almost daily, debating who loves the other one more. She always loves me to her room, to our backyard, to her school, to Nini and Pop Pop’s house, to Grandma and Paw Paw in Baltimore, allllll the way up to the sky and back. I always love her the same—and more. She may not understand Valentine’s Day, but I think she understands love. As, I think—I hope—Andy and I do. Me fretting over a backstitch, Andy buying an orchid even though we agreed not to buy each other gifts.

It’s simple, no? Yes, sometimes. No, sometimes. But there, always. It’s James choosing my lap over an empty seat on the couch. It’s Owen hugging me—clinging to my shoulder, face nuzzled into my neck—when I get him out of his car seat. It’s Sophie loving me to who knows where—everywhere—and back again. It’s same-old seats, on a same-old couch, watching a same-old show and loving it. Love.

“I love thee to the depth and breadth and height my soul can reach.” —Elizabeth Barrett Browning