As mentioned here, after months of searching, I finally found a decent patio set on Craigslist—for $50. Most patio sets are well worn, which is why the seller is selling it. But this family was moving, had no time or desire for negotiation, and just wanted it gone. I happened to be the first to contact the seller—he said I could pick it up at his moving sale Saturday morning at 10am. He lived about 55 minutes north of me, so early Saturday morning I woke up Andy.

“You have to take all the seats out of the van,” I said.

“Seriously, you have to get up. You have to take all the seats out of the van so I can pick up a new patio set. You know, the one I found on Craigslist,” I said.

“Yes!” I said. “It’s only $50! There is no way I’m going to find anything else this nice for this little money. And I don’t want someone to buy it from under me! Plus, you have fantasy baseball drafts today and tomorrow—I totally deserve two hours of driving alone. Unless you want to pick it up for me?” I asked.

He took them out.

I got to the seller’s house a minute after 10am. The table fit in the van perfectly. It was nicer than I imagined.

“It comes with chair cushions, too, if you want them,” he said.

I offered him more money. (I know. I should never be allowed to run a business.) He refused.

When I got home, Andy was trying to watch all three kids while also prepare for his draft.

“Can you help me unload the table and chairs and put the seats back in the van?” I asked.

“No!” I said. “Your draft is, like, eight hours long. What if I have to go somewhere while you’re gone?”

So, he put everything back—all the van seats, all three car seats. It took about 30 minutes.

Cut to mid-afternoon. While the boys napped, I posted our old patio set on Craigslist for $50. Immediately, the e-mails started coming in. I replied to the first person who responded. She was young, a recent University of Cincinnati law school grad and had just purchased her first house—and was in need of a patio set for her deck. She loved our set (which surprised me as there was a lot of rust) and loved our price. She could fit two chairs in her car, but nothing more. She seemed nice (via e-mail). She brought back memories of when I first used our old patio set. It previously belonged to my roommate’s boyfriend’s parents. My roommate, Jenna, and I spent many afternoons sitting at that set. When Andy and I married, she insisted we keep it. And we did. For seven years. I called Jenna on my way home from buying the new set, asking her what I should do with the old set. She agreed with selling it. I promised her the money. She insisted we all go out to dinner with it, instead.

Cut to late afternoon. Recent UC law school grad arrived in a tiny car, while the kids and I were playing outside. She was a beautiful 20something in tight black yoga pants, a law school T-shirt and perfect ponytailed hair. I felt, I don’t know. Mom-ish.

The 20something, kids and I walked to the backyard, where Tucker was playing. I opened the gate and Tucker was ecstatic at the site of this new visitor. He bounded toward the gate, sniffed her shoe and then sensed an opportunity. Two seconds later he pushed past all five of us and was bolting down the street.

We all ran to the front yard where I swear Tucker was yelling “I’m free! I’m free!” He was running and sniffing and peeing on everything.The kids were crying. They weren’t quite sure what was happening but they sensed I was frazzled and they knew Tucker was supposed to be in our yard, not a yard three houses down from ours.

“What can I do to help?” the 20something graciously asked.

I thought. I needed a collar. The front door was locked.

“Make sure my kids don’t run into the street,” I said.

I ran to the back of the house, ran up the deck steps, went through the back door, grabbed Tucker’s collar and unlocked the front door. It was clear this 20something had limited experience with children. Two of my children were sitting on the sidewalk, crying, after being told to “stop.” Sophie was screaming “Tucker!” I grabbed all three kids and shoved them inside.

“Please make sure they stay there,” I told the 20something.

I then chased after Tucker. Finally, I caught him, peeing in yet another yard. I drug him back to the house, shoved him in the front door with the kids (who were still crying/screaming) and promised them all that I would be back in one minute.

The 20something and I walked to the backyard and I (finally) showed her the old patio set.

“We just wanted to see you,” Sophie said.

Owen started crying again. I started telling Sophie how dangerous it was to go outside without me.

And then, as if on cue, the 20something, wide-eyed, looked at me and asked, “Is this what motherhood is like?”

I thought for a moment. I thought about lying, but she had already seen too much. So I told her the truth.

She loaded up two of the chairs and paid me $30. I told her she could keep the remaining $20 until after I delivered the table and remaining two chairs.

Cut to the evening.

Andy came home from the draft.

“Yes, but I have to deliver the rest of it.” And then, tentatively, “Can you take all the chairs out of the van again?”

“What?!? No. That’s not how Craigslist works. They pick up. You don’t deliver,” he said.

“But it’s a done deal!” I said. “She’s already picked up two of the chairs and she’s super-nice, just graduated, just bought her first place—we can help her out, can’t we? This is what good people do. Plus, she sort of watched our kids for me while I rescued Tucker,” I said.

I told him the story. We put the kids to bed. Both boys snuggled with me on a big cushy chair while I read “Goodnight Moon.” I wished the 20something could have witnessed this. Andy began the (long) process of taking out the van seats (again).

“We went somewhere,” I said.

He grunted some indecipherable response.

I drove the rest of the old set to Madisonville and helped the 20something put it on her new deck. I told her about the boys snuggling, about “Goodnight Moon.” I told her motherhood wasn’t all completely and totally crazy. At least, not every moment of it.

She gave me the remaining $20. I drove the van home. Andy reinstalled the van seats and car seats, for the second time that day. And threatened to use his web developer skills to ban the Craigslist website from our house. Again.

The next evening I set up the umbrella, put all the cushions on the patio chair seats and sipped a glass of red wine while watching our cardinal swoop around our yard. And wished the 20something could have witnessed that, too. 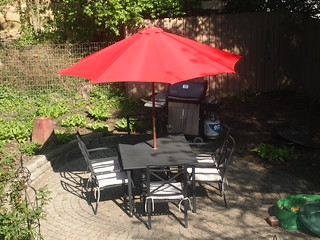