This winter has not been kind to us in terms of sickness. Early December all five of us had a stomach virus (a nightmare). Early February, despite flu shots, we were all sick with something viral, which my doctor suspected was a mild case of the flu. And which, a week later, turned into pinkeye. Last week, something viral invaded our family again.

Late Tuesday night Sophie’s temperature peaked at 106.5°. We called the doctor on call. Gave her Tylenol and Ibuprofen. Woke her up every hour to check her temperature and make sure she was lucid (which was difficult to determine as she was groggy with sleep). Her temperature dropped and steadied (although it was still high) so we avoided the ER but took her in to see the pediatrician first thing the next morning. Aside from a cough, everything checked out—including a flu test. But later that afternoon, she started complaining about abdominal pain and her fever peaked at 104.5°. Back to the pediatrician again (same day). She was tested for a UTI—nothing. So we continued monitoring her, giving her Tylenol, Ibuprofen and Delsym.

Of course Owen and James also had colds and fevers, with Owen’s temperature peaking at 105° one night. And then I caught it. And then Andy. James started complaining about his ear, so back to the doctor we went—double ear infection and the start of bronchitis.

With sickness comes fussiness. Thursday morning, before I knew James had an ear infection, I tried to pick him up while he was throwing a terrible tantrum on the kitchen floor. He flung his head up and his skull caught my chin. It hurt, the kind of hurt that instantly brings tears to your eyes. I put him down. Walked to the bathroom. Shut the door and cried as a bruise formed on the underside of my chin and blood formed on my lip, where my teeth caught the skin. At that point I had a fever too. I was exhausted from overnight temperature checks. I wanted to rip out my lungs from coughing. I had three screaming children outside my door and all I wanted to do was curl up in bed. My phone rang. It was my mom calling me on her cell. She was on her way. With lunch. I did that awful cry-talk back to her, thanking her.

How do moms do that? She called at the exact moment I needed to hear her. I can only hope I’m able to do the same for my children when they’re grown.

And then today. Sophie’s temperature came back (low grade, 100.5°) and she was still complaining about abdominal pain. So back to the doctor we went. Next thing I know all four of us are downtown at Children’s Hospital so Sophie can have an x-ray done—poor kid has pneumonia, in her lower right lung.

This winter has been filled with over-the-counter medicine distributed in plastic alligator spoons, around-the-clock temperature checks, inhaler treatments, nebulizer treatments (we own our own machine now), bedroom humidifiers, middle-of-the-night-bundled-up-because-of-the-freezing-temperature porch sits for croup, fussiness, wiping noses constantly, reminding to cover coughs constantly, so many missed days at school. And all I will say about the stomach virus is the laundry. My God. The laundry.

Is this normal? Sophie’s in preschool. Even her teacher was noting how another parent, rightfully so, called the classroom a big petri dish. (And they have a strict sick policy, as well as strict hand-washing policies—every child washes their hands first thing when entering the room.) One morning when I called her in sick I discovered I was the sixth parent to do so that day, in a class of 20-something. I take the boys to Child Watch at the Y—when healthy. We go to the museum—when healthy. We go to the library—when healthy. But then, I can’t help but think doing these things leads to more germs and more sickness. They’re building up their immunity, yes, but it’s exhausting.

And now it’s March. Yesterday we got one last big beautiful snowfall. (And please know that if I had known Sophie had pneumonia, I certainly wouldn’t have let her play outside—for what it’s worth, we were only outside for about 20 minutes … despite the good half hour it took to get geared up to romp around in the snow.) 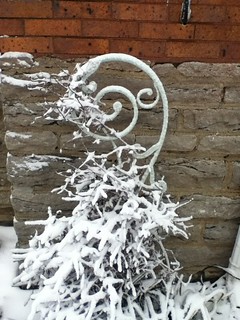 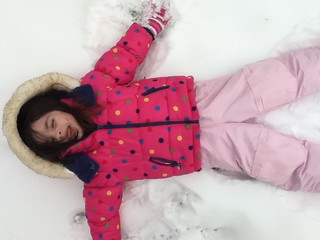 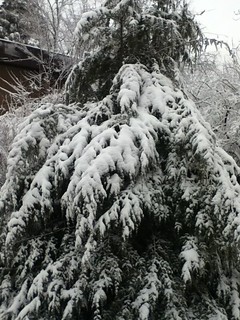 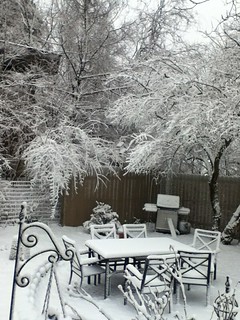 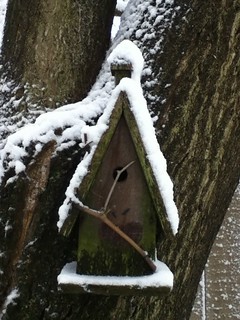 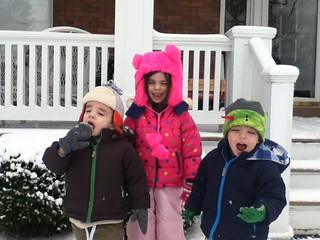 “Nature looks dead in winter because her life is gathered into her heart. She withers the plant down to the root that she may grow it up again fairer and stronger. She calls her family together within her inmost home to prepare them for being scattered abroad upon the face of the earth.” —Hugh Macmillan