They’re excited to go in the morning. They’re all smiles when they climb up into the van when their day is done.

They sing the songs they learned. They tell me about the rug work they did, the books they listened to, the snacks they ate.

They eagerly show me their papers. 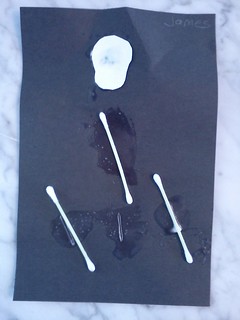 Owen (apparently he can write his own name and cut out bats):

James (this is about as much as he can get done without moving on to something else—in fact, I’m rather impressed with his “skeleton” above): 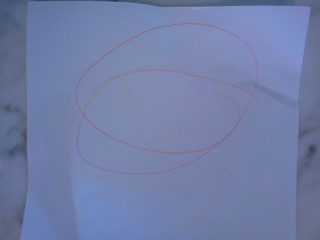 Today, Andy observed for a few minutes before going to work. Here’s a picture he took, of Owen and James “sitting” on the blue line: 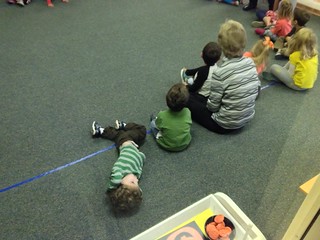 I know you’re not supposed to compare but seriously, all of this cracks me up. Because here’s the thing: I’m not worried about James. Truly, I’m not. Give him a puzzle meant for 8+ and he’ll sit and concentrate, finishing it. Give him anything he shouldn’t take apart and he’ll expertly dismantle it. Give him a pile of tracks and he’ll put together an elaborate, working system. All the rest of it? Well, he just does things on his own time, in his own way.

OK, so maybe if by spring he’s still bringing home papers with only scribbles on them, I’ll worry (a little). And if one of his teachers tells us he’s being disruptive while (not) sitting on the line, we’ll talk with him. If any of this becomes a problem, we’ll deal with it.

But for now, carry on, little man. Carry on.

“If you cannot be a poet, be the poem.” —David Carradine