I make wishy-washy New Year’s resolutions. To write them down would simply be overwhelming. There’s so much I want do do but mostly, I just want to do better.

But if I were to write them down, “do better with my blog” would top the list. Gosh I was terrible last year. I love to make excuses so here’s one: I get behind, and I don’t know how to catch up. Example: I haven’t posted about Halloween, so how can I post about New Year’s?

As my mom has told me several times, it doesn’t matter.

So here’s my New Year’s post. Halloween will likely be a month from now.

I restarted (for the fourth time) my Loseit.com goal. I am a cliché. And starving.

Around 10am I convinced Sophie to climb into bed with me while Owen and James ran around the house shooting these Plane toy things at breakable things. It was snowy and windy and cold and we curled up together under my down comforter and my new raw wool blanket (a perfect Christmas present) and Sophie chatted on and on and on about “Garfield and Friends” (yes, the TV show from the late 1980s, she’s obsessed) and I listened and nodded and laughed and slightly dozed and as much as I love Christmas and all its decadence the decadence of just sitting in bed mid-morning doing nothing was, well, decadent.

I made a lunch that no one ate and one that Owen cried most of the way through because it wasn’t cinnamon-sugar toast, which is what he wanted.

We spent 40 minutes getting dressed to spend 20 minutes out in the snow. 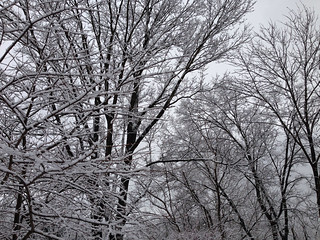 It was gorgeous outside. 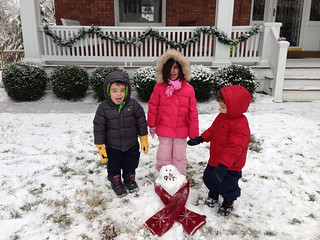 We built the world’s worst snowman. We were out of carrots (the reindeer ate them). I tried celery for a nose but it was much too big. So I used found vegetation. “It’s a bit lumpy,” Sophie said regarding the snowman’s smile. 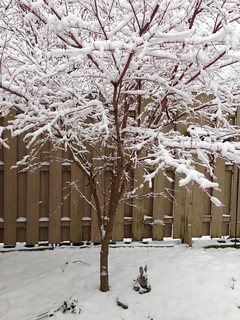 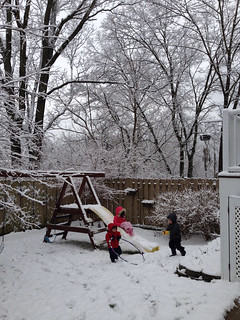 Once inside I made hot chocolate. We were out of milk, so it wasn’t the cocoa-sugar-milk-vanilla-stovetop kind my mom always made us, but the instant powdery kind made with a kettle of hot water, which Sophie told me several times “wasn’t nearly as good.” But I threw in a ton of marshmallows, which helped.

Then I sat outside the half bath for more than an hour with hot tea, waiting. (Details aren’t necessary except to say we’re still potty training.) 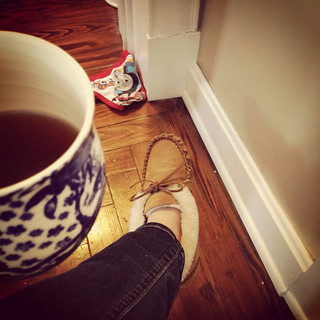 I made dinner with hands that smelled like clementines. Dusk fell and the snowflakes fell slower but bigger—they were beautiful. I wished for George Winston in the background but Team Umizoomi won.

Andy was late (traffic) and cold. I fled upstairs to do freelance work for three hours while he played board games and insisted on bedtimes.

And now I’m back in bed, under my down comforter and raw wool blanket, listening to icy snow hit our drafty, old windows that rattle in the wind but are so fitting to the house we never want to change.

And even though it’s just a moment, a day, a month, I’m happy for new beginnings—for a chance to restart goals, improve upon one’s self—to try again.

“I made no resolutions for the new year. The habit of making plans, of criticizing, sanctioning and molding my life, is too much of a daily event for me.” —Anaïs Nin