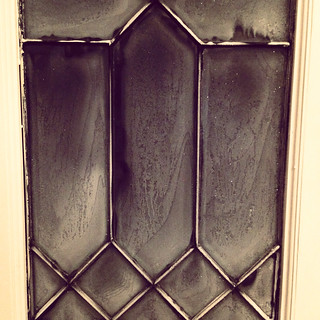 This morning, I noticed the most beautiful ice formations on the window in our half bath, accentuated by the early morning sun.

And then Owen climbed up on the stool to wash his hands and … nothing.

I looked at the ice crystals and let out a slow and heavy sigh.

We had forgotten to let the faucets drip overnight.

I read some “how to thaw frozen pipes” articles online, all of which talked about the importance of prevention. I called Andy at work. I turned on all the other faucets in our house (which were still working) to a slow trickle. I turned on the half-bath faucet, too. I put a space heater in the half bath, turned it up to 70° and shut the door.

Our house is more than 100 years old. The half bath was an addition. There is nothing below it, except a crawl space (which we discovered after moving into the house was used to store piles of slate tile that once served as the roof on the house—we’ve since turned several into mini chalkboards).

“You have to go into the crawl space,” Andy said, over the phone. “You have to find out what’s going on in there.”

On went my boots, coat, mittens, hat and scarf around my face. I bribed the kids with Neccos (yes, it was still morning) and TV. Out I went. Except the four-foot door, made out of wood and lattice and held on with rusty hinges, wouldn’t open. I looked down to see that a block of the concrete sidewalk had risen high enough to block the opening of the door.

Back inside, I called Andy.

“The pipes are more important than the door,” he said. “Do I need to come home?”

“No,” I said. I was determined to handle this mini household emergency myself.

I dressed again, and went back outside with a hammer. I looked for a pin to pull out in the hinges, but everything was ice-encrusted and rusted over. Still, I hit the hinges with my hammer a few times. Nothing.

So I lifted up and pulled on the door, with all my might, thinking if the door broke, so be it.

I crawled into the crawl space, smiled at the piles of slate tiles and wondered about the old moulding and hooks that were also down there. I could do something with that, I thought. I tried to focus.

I could (obviously) see no pipes. All I saw was cold stone foundation, and some poured concrete.

And then, I heard screaming. Owen screaming. A blood-curdling scream followed by sobbing.

I ran out as fast as I could to find him on our icy deck, in his winter coat on but upside down, barefoot.

“WHAT ARE YOU DOING?” I screamed, scooping him up and rushing him inside.

As I rubbed his feet to warm them up he said, “I wanted to help you and I couldn’t find my shoes.”

Back outside. I cleared out some debris and carried another space heater down to the crawl space (where, conveniently, there was a plug). I plugged it in, turned it up to 70° and shut the door.

Then I went back inside and read up on the dangers of space heaters, freaking myself out well enough that I checked on it (which required re-dressing for the weather) every 20 minutes throughout the day.

Around 3pm I noticed the ceiling of the crawl space bulging. I could see the insulation peeking out. I also noted past water stains.

Surely, I thought, our pipes had cracked and the space was filling up with water.

I went back inside, called Andy.

So I grabbed our drill, chucked a 3/8″ bit into it and didn’t think about the possibility of accidentally drilling into the pipe until I was halfway through the drilling job. I pulled the bit out, held my breath and waited.

Back inside. Back to peeling clementines, building Lego towers, insisting on Christmas thank-you notes, soaking a doll’s hair in a concoction of water and fabric softener, negotiating TV time, fruit snacks and games on the computer.

Back to checking the crawl space.

And then, something clicked. The space heater running in the bath wasn’t pushed up right next to the pipe. I was simply using it to heat the space, in general. I felt the pipe, behind our pedestal sink, and close to hardwood floor it was, indeed, very cold. So I pushed the space heater up practically against the pipe and set the temperature for 75°. And while peeling clementines (for the 10th time that day) I heard the noise of rushing water—it was from our faucet, into our sink.

I’m still holding my breath. Having only lived in 100-plus-year-old houses since Andy and I have been married, I’m used to things not working out. In fact, I still keeping checking the crawl space, expecting to find water everywhere.

But for now, we have running water. And for now, our pipes haven’t burst. And forever more, I’ll run a bit of water every time it gets this cold (that’s what you’re supposed to do, right?).

“Three feet of ice does not result from one day of cold weather.” —Chinese Proverbs quotes