This morning Andy woke up to find James staring at him, little chocolate fingerprints staining the sheets. Turns out we forgot to close the gate at the top of the stairs. Again. And instead of waking us up, James went downstairs, got into the candy basket and ate half a chocolate Easter bunny. Not only did he eat the bunny, though, he tried to hide the fact that he did. In the bathroom we found bits of chocolate stained toilet paper on the wooden stool and chocolate fingerprints covering the toilet paper roll. He did a fairly good job of cleaning himself up, honestly—except for his chocolate-covered nose.

Today is Sophie’s last day of preschool. She attends Fort Thomas’s Country Hills Montessori school and loves it. This morning she was a mix of emotions—giddy with the idea of starting kindergarten and upset knowing today was her last day at this place, with these people, who have meant so very much to her (and to all of us). But she was also excited because the boys, who will be attending CHM next year, were invited to spend the morning at her school.

All three were excited. 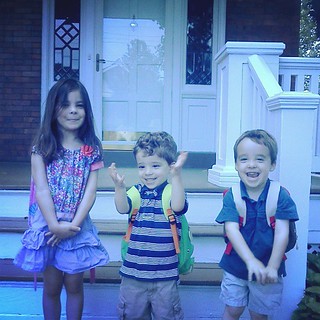 The boys insisted on wearing their backpacks. They skipped to the car and ran into the school, smiling.

Sophie showed them where to put their backpacks and then led them to the small sink to wash their hands. Then they spotted the gerbil. They were supposed to be sitting on the blue line, criss-cross applesauce. I let them check the gerbil out, thinking a quick peek would quiet them. It did not quiet them.

“I want to see the gerbil!”

“I want to do the puzzles!”

“I want water from the water fountain!”

I was so embarrassed.

At this point, Owen was doing better than James. So I pulled James aside (and by pulling aside I mean I had to, literally, chase him down) and explained the importance of the line, of criss-cross applesauce, of being quiet and listening to the teachers.

Once group work started I apologized to the teachers. I promised I would work with them. The teachers were so kind and assuring, promising me this was normal. I’m sure it’s normal, the first week or so. But for everyone else, it was their last week. Everyone else was sitting on the line, criss-cross applesauce—including Sophie, who kept hissing “Boys! Sit down!”

And now we’re home. And they’re fighting over oven mitts.

A confession: I’m already dreaming of fall, when, for 2-1/2 hours three days a week, I’ll have three kids in school.

That is, if they’re allowed to stay …

“Children are a great comfort in your old age—and they help you reach it faster, too.” —Lionel Kauffman