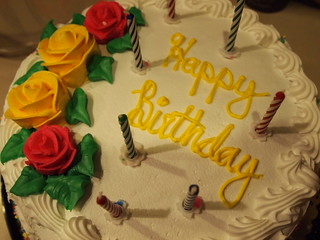 In January we celebrated my grandma’s birthday … 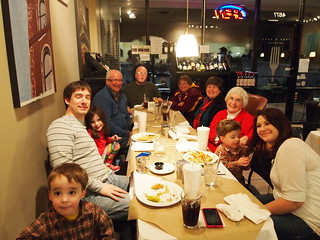 with dinner at Troy’s Cafe. Part of me hesitates writing this, because it’s such a great suburbia secret. Situated at the end of a strip mall in West Chester, an area awash in chain restaurants, this little gem of a restaurant has delicious, reasonably priced food, good wine and desserts. Andy and I have celebrated an anniversary there. We’ve dragged all our friends up north to celebrate a birthday there. When family is in town, we often eat there—my parents could be considered regulars. It’s small, but I’ve never had to wait. When we have a large group, we make reservations. But still. I don’t understand why it’s not packed, all the time.

And they are so nice. I have taken many-a-crying child out to the parking lot only to be given extra crayons or a refill of milk upon our return. Two visits ago, Owen dropped his entire cupcake after only one bite. I think he got out only a couple tears before someone from Troy’s just appeared, new cupcake in hand at no cost.

“Never trust the food in a restaurant on top of the tallest building in town that spends a lot of time folding napkins.” —Andy Rooney