I could have renewed my driver’s license this morning, while the kids were at school. But I had editing to do and I love my quiet/coffee/home-alone time. Plus, I thought, the kids would get a kick out of helping me on the errand. I could teach them about licenses and the responsibility that comes with driving a car and … lines.

I picked the kids up from school and the first thing we did was eat out—this allowed everyone to use the bathroom and everyone to fill their stomachs, and as a bonus, they felt as if it was a treat. So, they were happy.

Next up, the DMV.

“Just drive down 27—it’s the new building on the left,” Andy said.

I did exactly what he said and somehow ended up at the police department. The woman in front of us was, shall we say, in distress. After I noted the bars over the windows and the fact that everyone was carrying a gun, I said to another woman behind me, “This isn’t where you renew your driver’s license, is it?”

We left. I answered lots of questions. I loaded everyone back in the car. I called Andy.

“Why would you go to the police department? You need to go to the other new building,” he said.

“What’s the building called?” I asked.

Turns out it was the County Clerk’s Office and wasn’t far. I drove, parked, unloaded the kids, found “DMV” on the directory and we waited in line, for about 20 minutes.

“Are you here for a renewal?” a woman asked, when it was our turn.

“You’re in the wrong building.”

At this point I had already threatened the loss of and given back the promise of fruit snacks once home to the kids about 12 times.

I loaded everyone back in the car. And drove to the courthouse. 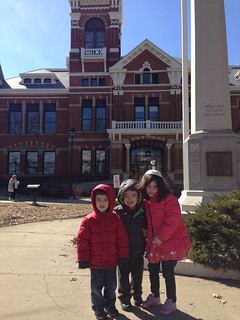 This time, I had to parallel park the minivan. And once inside the courthouse, the kids had to walk through a metal detector, which James tried to go back and forth through three times. Thankfully, the officers were kind and awarded the kids for being somewhat reasonable with gold Junior Sheriff Deputy stickers.

We walked down a hallway and down a staircase to another hallway where there was a really.long.line.

And so we waited. The kids begged for candy from one of the four snack machines next to us. I didn’t have enough change. We waited. The boys couldn’t leave the flexible line divider thing alone. I scolded. We waited. We played Simon Says. We waited. The kids spotted a water fountain and I tried to bribe them with water, saying if they were good in line we’d visit the fountain when we were done. We waited. A bench freed up and the kids sat. Well, Sophie sat and the boys started a wrestling match with each other. I scolded and gave them my phone to look at pictures. We waited.

We waited and waited and waited until we were called and the woman behind the desk asked me if the address on my license was current and I said “yes” and then looked at my license and realized it was not (we moved years ago) and I told her so and then she asked for proof of address, such as a piece of mail.

Thankfully, my checks have my current address and that sufficed.

Next I spent an entire minute explaining to Owen why he couldn’t be in the picture with me. I smiled against the blue backdrop, while all three of my kids were on the floor around my feet, done with the day.

I got my new license.

“Do you want to see it?” I asked Sophie.

“Everything in life is somewhere else, and you get there in a car.” —E.B. White