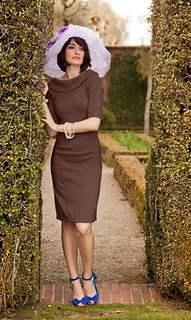 This isn’t the first time I’ve been asked to host a giveaway or write a review. I’ve always declined, though, because the products didn’t seem fitting. But when Shabby Apple, a lovely site that offers a modern take on vintage clothing, asked if I wanted to give away a dress or skirt to one of my readers, I said yes. I thought it would be a nice way to say thank you for reading and commenting all these years—plus, I’d love to own something from Shabby Apple and so I thought you would, too. Please note: I’m not receiving product or compensation for this post—I simply thought a giveaway would be fun.

To enter, please click on the links below and tell me via a comment directly on this blog which item is your favorite. The giveaway will close Friday, June 7 at noon EST. I’ll write all your names on little slips of paper and let the kids choose one from out of a hat, and I’ll post the winner no later than midnight.

“Just around the corner in every woman’s mind—is a lovely dress, a wonderful suit, or entire costume which will make an enchanting new creature of her.” —Wilhela Cushman

Quick update: Sophie’s surgery went very well. Turns out she had three hernias (two inguinal ones, left and right, and an umbilical one) so her recovery will take a little longer. (No ballet for three weeks—we’ve yet to break this news to her.) But she’s sitting up on the couch now, coloring, watching The Last Unicorn and, I’m sure, contemplating when she’ll get her next popsicle.

Thanks for all your love and well wishes.

This week I stopped by a new bakery in Fort Thomas, Cake Towne, to buy a small chocolate cake with peanut butter icing. Six months ago this trip would have seemed impossible to me. I had all three kids with me. I didn’t know the parking situation. It was cold. I had no idea how I was going to carry two carriers and a cake, and hold onto Sophie’s hand on our walk back to the van.

But this week, I just went. I knew I wouldn’t have all the answers going into it but I also knew (having done this for almost nine months now) that somehow, I would get through it. I’ve quickly learned that an “I can’t” attitude will deprive my children of many excursions and leave me miserable. So, I’ve adopted an “I can” attitude even though, if I’m really honest with myself, often I have no idea if what I’m attempting is possible—in which I then just remind myself how thankful I am that my mom is retired because worst case scenario, I can call her and plead a rescue.

Back to the bakery. My “I can” attitude paid off. Before I even handed over my credit card to pay for the cake the woman who (quite beautifully) boxed it offered to carry it to my car for me. But before she could do that a friend of mine, Peggy, unexpectedly walked in. We knew each other in high school but only recently bonded via Facebook, in part thanks to our similar lives—we both live in Fort Thomas, and we both have toddlers and baby twins.

About 42 seconds into our conversation two of my three children began to melt down. Sophie wanted held. Owen started to cry. I picked up Sophie and lifted my foot to rock Owen’s carrier, which was on the floor. However Peggy (who was without children that morning) leaned down and picked Owen’s carrier up—swinging it, calming him, helping me. She carried on our conversation like it was the most normal act of her day and, given her very similar situation to mine, it probably was. She carried a carrier for me to my van. She even put it in.

I am thankful for all my friends but let me just say this: I love my mom friends. And I especially love my friends who have multiples. There’s never any asking. These friends will pick up one of my children instantly, instinctively and incredibly the moment before they melt down as a means of helping out–even when their hands are full with a child (or children!) of their own.

My friends who have children also have the lowest expectations when it comes to cleanliness—of myself, my children and my house. My friend Jenna came over the other day and I pointed out a basket of clean clothes in the middle of our living room floor. The clothes were just sitting in there, getting more and more wrinkled by the minute. First, she offered to fold them (which I thanked her for but told her no) and then she commended me for having clean clothes to begin with. Normally, I would have inwardly obsessed about that basket our entire visit. But her attitude towards it made me forget about it and, for once in my life, truly not care about it.

My friend Angel stopped by this morning. The house was a disaster. Andy was still in his pjs. I can’t tell you how I looked, because I hadn’t even had the chance to look in a mirror yet that day. But I didn’t care at all. She has a child (and another on the way!). She was painting that day. I was dealing with a teething baby. She said how much she loved our living room paint job, which is only halfway done. She didn’t care that we still had paint cans, brushes and a ladder out, along with a bazillion toys and remnants of breakfast—plates with muffin wrappers, bottles, and coffee and sippy cups—all over our living room, dining room and entry.

Back to the cake. It was a birthday cake, for my friend Michelle, who has a daughter in kindergarten and twins a little younger than Sophie. We were meeting Tari who also has twin girls, a month younger than Sophie. We had a play date scheduled that morning. I was an hour and a half late. If you knew me before kids, you’d know I never used to be late. I hated being late. But now bottle feeding and diapers and spit-ups and lost shoes and diaper bag refills and pumping and bottle making and Mama-but-I-have-to-bring-my-favorite-toy-of-the-hour-you-HAVE-to-find-it and taking Tucker out and loading the van (after emptying the van of all sorts of toys and trash) get in the way.

But here’s the most wonderful thing: They didn’t care. It was assumed. I love them for that. I also love that I can go over there in a ridiculous headband because all the hair I lost postpartum is finally growing back—which means I have 1″- to 2″-inch-long chunks of hair all over my head, which I have no idea what to do with. I also love that I can disappear to find Sophie who has disappeared to find a potty or a toy to play with or whatever and I know someone (probably, both of them) will instinctively watch my boys. I love that Michelle has purposefully kept a bouncer at her house for when we visit (which is not enough!) and that Tari will pick up Sophie even if she’s holding her daughter Whitney while her daughter Lauren is hugging her leg (I have a great picture of this). And I love that I can tell both of them many things, anything, and they don’t think I’m a bad mom. Their children cry, too. They lose their patience, too. They struggle with loving these little people so much they can hardly stand it—yet at the same time, admit that every once in awhile they miss their old lives—as I do, too

Before I had children I had no clue. I never thought to make a casserole when visiting a friend’s newborn. I was too shy and scared to pick up a friend’s crying baby without asking. Never ever would it have crossed my mind to offer to fold someone else’s clean clothes.

But now I know. And I’m so very thankful for my friends—both with children and without—who know. Because it’s so freeing to be able to visit a friend, sans makeup. And it’s so relaxing to not stress about the state of my house when an unexpected visitor stops by. And it’s so calming to know that if one of my children cries, there will be another set of hands to help. And it’s so fulfilling to know that I can do the same, for them. And now that the boys are older, I’m trying. Slowly, but surely, trying. Because I owe so much. (For example, thanks to my mom friends Julie, Rebecca and Christine, we’ve hardly spent anything on new clothes.) And you know what? Not one of my mom friends has asked for anything in return. Instead, they’ve said to pay it forward. Because all the kindness that they’ve bestowed on me has, at one point, been bestowed upon them.

So I think back to when my friend Julie (who has three children, two of which are twins) would come by and take Sophie out for a few hours—because she knew that’s exactly what I (and Sophie) needed. And I think back to when my friend Michelle came over with her oldest and insisted I nap the entire time she was here—while she watched Sophie and my boys.  And I think back to the free crib we received and the NICU visitors we had and the meals that were made and the extra—the so many extra—hands we have benefited, and are benefiting, from.

I wish I could run into all my mom friends in a bakery and pick up their second (or third or fourth) born who is crying, without even being asked. But in the meantime, thank you. Thank you. And know that I now know. And even if I’m not returning the favor, I’m trying to remember to forward it. Whenever I can.

“It takes a village to raise a child.” —African proverb Sophie always has been a great help to me with the boys. She eagerly fetches burp cloths and blankets, diaper rash cream and wipes. And lately, the tasks I’ve given her are more complex. “Please go upstairs, open the bottom drawer of the boys’ dresser, pick out a pair of pajamas and bring it down.” And she did! (I admit, I was surprised.)

Lately, she helps me feed the boys. Not for very long. She gets distracted. They get distracted and she can’t keep the bottle in their mouths. But she tries. And I appreciate it. I hope she knows that. And I hope she’s this willing to help in the future, say, when she’s 16.

“The only gift is a portion of thyself.” —Ralph Waldo Emerson