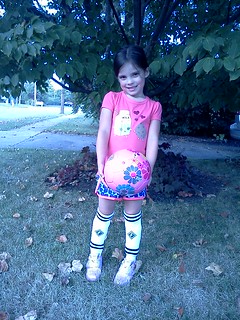 Now that Sophie’s older, I hesitate writing—deeply, sincerely, truthfully (the hard truths, anyway)—about her. I have a few, very specific memories from age 5. Her story is becoming her own now and I feel it’s her place to tell it someday, if she chooses—not mine.

That said, our stories often intertwine. As they did tonight.

Sophie started soccer last week. It’s clear a good portion of her DNA is from me.

The practice did not go well. Sophie insisted I hold her hand the entire time. (Side note: Her coach is great—constantly cheering her on, running a lap with just her to make her feel more comfortable, etc.) I tried to stay by her side, but I have two other children. James was screaming/crying/whining on the sideline the entire time. Owen was wearing yellow (thankfully) and at one point I (easily) spotted him playing with another kid and another parent on another field. (I’m drinking a glass of wine as I type this.)

My friends helped. A lot. They kicked an extra soccer ball around with Owen and James. They rummaged through my van for books for Owen and James and then read books while Sophie clung to my hand. They advised me to enjoy my previously mentioned glass of wine.

Near the end of the practice, Coach K asked if I wanted to play in a game. I looked up and spotted a flash of Owen’s yellow shirt semi close to the field Sophie was playing on. James was sitting in his Thomas the Train lawn chair, screaming. But sometimes we as parents have to make hard choices. And on this night, it was clear that Sophie needed me most.

The game was this: All the kids had their own soccer ball and dribbled it around the field. If they hit one of the coaches with their ball they got to tell that coach to make a loud animal sound of their choosing. Cute and clever.

However. My focus in all this wasn’t to really dodge balls. Instead I (in my ballet flats and skinny ankle jeans) was trying to keep track of Owen’s yellow shirt, mime to James that it’s OK and I’ll be with him soon, and persuade Sophie that soccer is really fun and that it’s OK to make mistakes. This made me a very.easy.target. Two minutes in I was surrounded by seven different kids consistently hitting me with their soccer balls and screaming “monkey!” “elephant!” “lion!” “zebra!” (and apparently my zebra sound isn’t up to par).

Parenting those first few blur-filled months is hard. But every few years you find yourself in an entirely different ball game.

When I was in junior high, I played intramural basketball. I was terrible, mostly because I was so timid—and like a certain 5-year-old I know, terrified of making a mistake. My dad went to all my games. I knew how to dribble. How to shoot. I knew the rules. What I needed was a lesson in aggression—and the knowledge that if the whistle is blown because of something I did, it’s OK. So he told me I had to foul. At my next game, I had to foul.

Which, I guess just means we’ll just fumble through this together. And I hope, soon, I’ll find the answer, just as my dad did. And it will be you on the field, filled with bravery, and me in the stands, clapping with relief/pride.

“Soccer is simple, but it is difficult to play simple.” —Johan Cruijff