Getting out the door with all three children is tough, especially in cold weather. I refill the diaper bag. I check diapers. I remind Sophie to try to go potty. Again. And again. And again. I find six socks. I put on six socks. I find six shoes. I put on six shoes. I find three coats. I put on three coats. Two out of the three want to zip them on their own. I unzip. One can’t zip on his own, gets frustrated and starts to scream. While I’m solving that matter, another one takes off his shoes and socks. While I’m putting those shoes and socks back on, I’m informed that someone has a stinky diaper.

With the wrong attitude, it can be maddening.

But it’s oh-so-much easier than it used to be. Now I can leave pretty much regardless of the time, without thinking about breast milk and pumping and bottles and bibs and feeding times. Now, if they’re hungry, I just pack snacks. And water bottles. And, of course, my favorite Trader Joe’s organic lollipops for any unexpected meltdowns.

Again, with the wrong attitude, it can be maddening.

But I see a hint of light. Sophie, for example, is in a booster seat. Often, she buckles and unbuckles herself. This brought me such unexpected joy. To think that someday all my children may climb in the van and buckle themselves in …

Even as things continue to get easier, though, something changes. Like where we put on shoes and socks. Lately the boys have insisted that we climb to the top of the stairs for this activity. 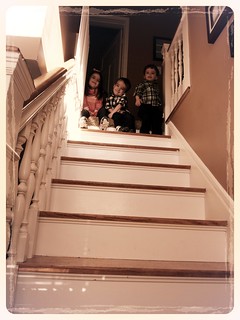 I learned early on I must choose my battles. This one, I don’t fight. It’s not worth it, when we’re trying to get out the door. I don’t know why they insist on it, every time. Again, again, with the wrong attitude, it can be maddening. With the right one, I like to think of it as extra exercise. Extra exercise, with a heavy sigh.