Owen is completely trained—day and night.

James James James! No. 1, great. No. 2, refuses. He hides and then comes to us, hands covering his eyes and whispers what he’s done.

We’ve set the timer for every 15 minutes for days at a time.

We’ve sat with him, reading book after book.

We’ve let him sit in the living room, watching TV.

We’ve tried a small treat for each attempt.

We’ve let him go naked at home, all day long.

We’ve tried peer pressure. “Sophie does it! Owen does it! Everyone at preschool does it!”

We’ve purchased the toy he wants most and placed it, still in its package, on a shelf above the toilet. For weeks he broke my heart, holding it while trying to go.

We’ve tried having long talks with him after an incident.

We’ve become frustrated with him, showing him our frustration.

We’ve made cheerleaders out of Owen and Sophie—they sit with him or they dance in the bathroom while he sits or they sing silly potty songs to make him laugh.

We’ve tried the potty training books (all of them).

We’ve tried putting him in charge—letting him pick out the underwear, the treat, the reward. Letting him make his own chart and help set his own goals. Letting him ask us what he needs from us or, at the least, letting him tell us what’s working and what’s not (it’s forever, “I don’t know”).

We’ve had some small triumphs. He earned the toy, in the package, just last week—and then promptly lost it.

And then there was tonight. I saw him get up and hide in a corner. So I jumped up, picked him up and carried him to the bathroom. He was furious with me. I took a deep breath, and remained calm. I talked in a soft, low voice. I asked him questions, like I always do.

Me: “What are you feeling right now?”

Me: “Is it easier standing up?”

The questions got more graphic from there—I will spare you.

After about 40 minutes of the two of us sitting in our small half bath, with Owen and Sophie bopping in every once in awhile with cheers of support, he went. He was so pleased with himself. Knowing he was close, I had told him we’d go straight from the half bath to Target, where he could pick out a new train. I knew he was close, and I didn’t want to waste the opportunity. I thought he was over the old toy he had earned and lost. And this was something I never do—the very thought of it was a treat.

It was 7:45pm. Bedtime is 8pm. Andy wasn’t home, which meant me piling all three kids into the van in 21° weather, navigating our icy driveway, getting everyone into Target and negotiating a reasonably priced toy.

I let Sophie and Owen pick out something small, too, which again, is something I never do. But they have been so supportive of James, and they have been so good playing with each other while I spend a ridiculous amount of time with James in our little half bath, as they did tonight. They deserved a treat, too.

The trip went so well, with little complaining—even over the cart seating arrangement. James, clutching his new train, promised, over and over, to not have any more accidents.

I felt like a huge weight had lifted off my shoulders.

We got home, well past bedtime. I wrangled everyone into pjs. We brushed teeth. Turned down beds. The whole bit.

And then James covered his eyes with his hands and whispered, “change me.”

I inwardly screamed. I stared at him, mouth set, making no noise. Inside, I was losing it. Inside, I was a tired, frustrated, defeated mama who would just like to go one day—one day!—without cleaning up someone else’s poop.

He lost his new toy, which I felt terribly bad about but he didn’t fight me at all—he knew he couldn’t keep it.

I told him he could earn it back.

But we’ve done this already, with the other toy that sat on the shelf above the toilet for weeks.

So now what? He’s working to earn two toys back? When does it end?

People say to give it time. But we’ve been doing this for more than a year now.

Help. Please help. Not with stories of how you potty trained in a weekend (those stories aren’t real, right?) but with tricks, tips, ideas.

“The story of a mother’s life: Trapped between a scream and a hug.” —Cathy Guisewite

Last Sunday I spent much of the day in bed, writing. I had a 2,000-word article due first thing Monday morning. I also had a sore throat, runny nose and a terrible headache. Everything ached. I was exhausted.

Monday morning, I rallied. I felt (a little) better. Andy went to work. I cleaned less than normal and kept the TV on longer than normal. But, as colds are prone to do, I felt worse as the day dragged on and when Andy came home, I went to bed.

At around 2am I looked up to see him standing next to me. “Bee, Are you awake?” I was. Sore throats and headaches are difficult to sleep through. “There’s a bat in the house,” he said.

(It eventually found the door.)

Tuesday, I tried. I really did. But in the end Andy picked up Sophie from preschool and stayed home the rest of the afternoon, trying to work from the couch and amuse the kids all at the same time. I took NyQuil, at noon, and slept and slept and slept, not hearing and not caring about the chaos that was happening outside my door.

Andy went back to work Wednesday. My mom offered to come over and help but I felt better. I cleaned. Played Candy Land. Put train tracks together. Convinced Sophie to play on her LeapPad next to me in bed while the boys took their nap. But again, by evening, I was miserable (and this didn’t help). Andy came home and I took my shot of NyQuil and went to bed.

Thursday, Sophie woke up with a terrible cough and a 101.6° temperature. I kept her home from school. I bribed the kids with milk and a TV show so I could shower. After my shower I came downstairs and discovered Owen’s entire Thermos of milk had spilled all over the couch, soaking through three down-filled cushions and the frame. 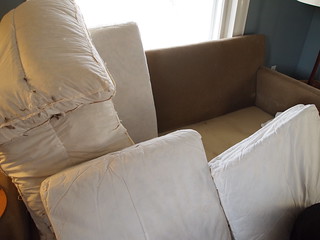 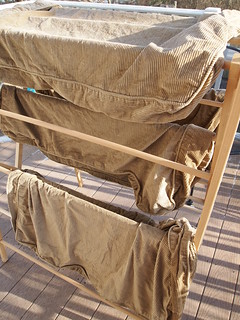 It took more than an hour to soak up the milk and strip all the cushions so that I could wash (ignoring the spot-clean only instructions) and line-dry them.

That afternoon I (finally) had a doctor’s appointment. Despite my flu shot, turns out I had had a mild case of the flu. I was on the upswing, though. No temperature. No all-over achey feeling. Just a lingering cough and a sometimes-headache.

I felt better about having had to ask Andy for help on Tuesday. And I felt worse about not allowing myself to accept help the other days I was truly feeling bad. Even a mild case of the flu deserves time in bed.

That night I ran to Target to pick up some medicine for the kids. They were all feverish now. And coughing. And constantly demanding tissues for their runny noses. Or, as James screams, “MY NOSIES, MOMMY! MY NOSIES!”

This week had been bad. No one felt good, a fact that tinged everything. Owen whined and cried, constantly. James refused to listen, ever, and was put in time-out multiple times each day for hitting. Sophie, more than once would yell “YOU’RE NOT BEING FAIR!” to me when I would ask, quietly, for her to, say, pick up her puzzle before watching a show.

All of this was swirling around my head when I saw the gold stars on one of the $1 shelves at Target. I realized, then, that I had spent much of the week drowning in negativity. From the beginning of this whole motherhood business I’ve put a lot of stock into the idea of a well-timed compliment. And, for the most part, it’s worked well for me. Daily I remind myself to praise my children for their good deeds as much as I (if not more than) scold them for their bad ones. But this week, there was little positive and a lot negative. Coupled with being sick. And it snowballed. The angrier and more frustrated I got with them, the angrier and more frustrated they got with me. The kids needed some gold stars.

Except I got mailboxes instead. Little tin mailboxes for a $1 each. And temporary tattoos and Tootsie Pops and kazoos and lollipops and Silly Putty and bubbles. Nothing expensive. That night I poured all the treats into a bag and hid the bag in the pantry. I put the mailboxes on the stairs. Sophie noticed them immediately the next morning.

I apologized for the rough week. I acknowledged that we were all sick. I reminded them of the things they had done/were doing that turned me into oh-my-god-what-were-we-thinking-having-all-these-kids Mom and how I very much wanted to go back to this-life-I-have-is-pretty-damn-great Mom. I said if they worked on not whining/not hitting/not fighting/not screaming/etc./etc./etc., I would work on taking notice of the times they were being kind, the times they were being good, and acknowledging that. 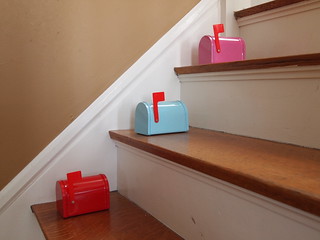 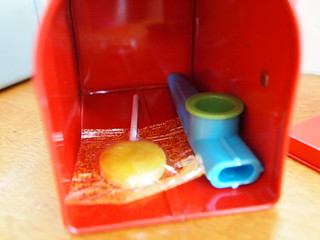 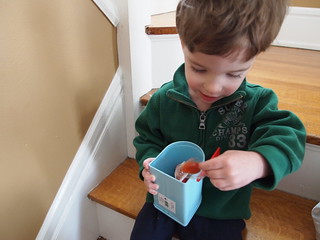 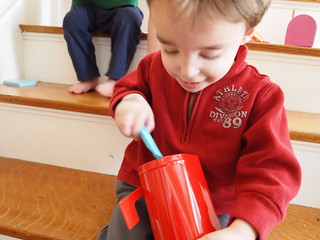 If the flag’s up, that means someone is doing a great job and a treat’s inside. I don’t want to bribe my children (although I fail at that, daily). And I realize this is a form of bribery. But these mailboxes saved me. I never put a treat in the mailbox as a direct result of them doing something good (like not hitting when upset, cleaning up, staying in bed at nap time, etc.). Rather, it’s simply an unexpected middle-of-the-day surprise, after a couple hours without (for the most part) screaming, hitting, whining, talking back.

They loved it. Attitudes changed instantly. Bonus: It was a new plaything. They ran up to the playroom and spent a great deal of time “writing letters” to each other and putting them in each other’s mailboxes.

Things are still iffy. Today, there was only one mailbox treat (and even Andy said, “Are you sure they deserve one today?”). And I haven’t been able to bring myself to give one child a treat and not the others—rather I wait until everyone has been reasonably well-behaved for a period of time. (Although I imagine singling out positive behavior would make a deep impression.) I’m still on prescription cough medicine. Two of the kids still have low-grade temperatures. And now Andy doesn’t feel well.

But the week is done. We made it, if barely. We made it despite the sickness, potty training mishaps, flying bats, milk-soaked couches and the bead that got stuck up Sophie’s nose. (Saturday Sophie suddenly was in hysterics, going on and on about a bead that she “just put close to her nose, to smell it” but was actually stuck up her nose. Thankfully we were able to get it out our own, although it took a good half hour, several sets of tweezers, a detailed description of the differences between “exhale” and “inhale,” and a lot of tears. She’s promised not to do that again.)

Here’s hoping for a better week this week. Considering I leave for San Francisco to visit my brother, alone, early Friday morning, I’m sure it will be.

And I’m sure, when I return late, late Monday night, I will be more than eager, well, let’s just say eager, for the chaos to resume on Tuesday.

“In spite of the six thousand manuals on child raising in the bookstores, child raising is still a dark continent and no one really knows anything. You just need a lot of love and luck—and, of course, courage.” —Bill Cosby