For months Sophie has been begging to have a sleepover. She’s still so young, though—I feared no one her age would be allowed to spend the night or that if she spent the night at a friend’s house, we’d be called around 2am to come and get her.

Then my new friend Sarah had a fantastic idea. Andy often games on Friday nights. As such, every once in awhile I’ll have girlfriends over for tea/wine after the kids are in bed. Sarah suggested we get together on a Friday night and let the girls have a sleepover in Sophie’s room—just until it was time for Sarah to go home.

Sophie was so excited. They wore their pjs and cuddled up in their sleeping bags on the floor of Sophie’s room. Madeleine brought two kinds of popcorn and I made pink milk. They played board games and watched a Barbie movie and “The Last Unicorn” on the little portable DVD player we set up in Sophie’s bedroom. Eventually, around 10:30pm, they both fell asleep.

Sarah gathered Madeleine up in her sleeping bag, and took her home. Sophie crawled up in her bed, and fell asleep.

It was the perfect 4- and 5-year-old sleepover. 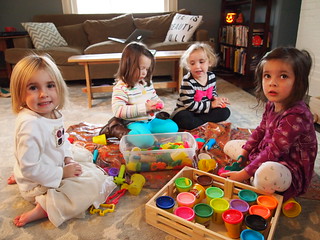 First up, playing with play-doh which, ultimately, 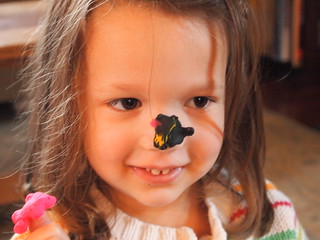 ends up on the nose … 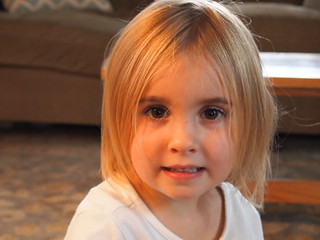 Every day Sophie begs me to have her friends over. 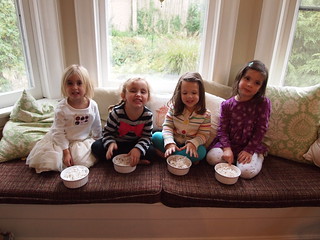 So they can eat popcorn on the window seat. 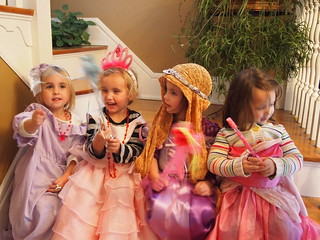 And play fashion show/princess/dress-up on the stairs.

Sophie has so much fun at and hosting playdates … substitue Play-doh with wine and dress-up with shopping, while keeping the friends and popcorn, and I’m in.

“Little girls are cute and small only to adults. To one another they are not cute. They are life sized.” —Margaret Atwood