It’s summer. Not technically, but the pool at the Y is now open so really, it’s summer.

We’ve been twice. The first time I took all three kids by myself, to meet my friend Angel and her daughters, Zoey and Mya. 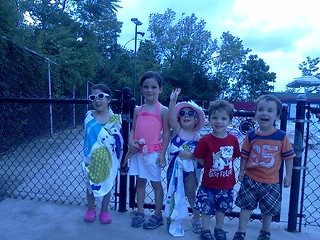 It was so much easier than last year. The kids played in the children’s pool for more than an hour. I sat for much of the time. And talked to Angel. James went down the water slide over and over and over. Sophie dipped her naked Barbie in and out of the pool. Owen, well Owen spent much of the time on my lap but still, when he did get in the water, he had fun.

I envisioned a glorious summer made up of afternoons at the pool, in the sun, happy.

So naturally our next visit to the Y was a disaster.

Andy and I took all three kids Sunday. Everything was great—until we had to leave.

All three lost it. We immediately stopped, got down on our knees at their level and sternly told them how inappropriate their behavior was and how there were going to be consequences as soon as we got home.

James listened to us and stopped.

Sophie (Sophie! Who is 5!) and Owen drew stares.

It was if their bodies had been taken over by demons. They screamed and kicked and carried on in a way we have never seen before. I took Owen. Andy took Sophie. There was no talking to them at this point. We carried them, our heads down and lips tight.

The walk to gather our towels and then exit the Y was so long. So very long. It’s not an exaggeration to say that everyone took notice. Some people had half-smiles on their faces, with I’ve-been-there looks. Some had frowns, with why-can’t-you-control-your-children looks. Some were bewildered, with dear-God-is-that-what-it’s-like-to-have-kids looks.

I wanted to disappear. I still get red-faced thinking about.

Once home, once calm, we had a long discussion about leaving, kicking, hitting, screaming and appropriate behavior. Owen and Sophie lost all dessert and treats for three days (which, for them, is a very. big. deal.). And we’ve told them that from now on we’re not going to put up with even a hint of whining when it’s time to leave—and that if something even close to that happens again, stricter consequences will occur.

So far, everyone has been incredibly well-behaved today. Sweet, even. So much so that I’m half-tempted to drag them all to the pool just to say, “See! They’re not always possessed by demons! Most of the time they’re actually wonderful, kind, incredibly-pleasant-to-be-with children!”

Tell me: Worst public tantrum (if only to make me feel better).