I have a lot I want to write right now but it’s too much. I can’t put my thoughts together. Sometimes, three-year periods bear little change. Others start with you in the NICU with two little people who—combined—weigh less than your cat and end with you watching them walk down your front walk wearing backpacks.

This picture pretty much sums up the morning. James has just found out that we aren’t going to be in preschool with him (we thought this had been made clear much earlier—apparently not). Owen (who is usually our more timid child) is thrilled. 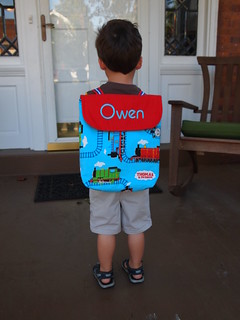 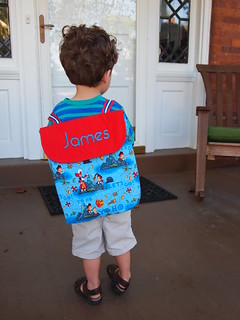 Check out their personalized handmade backpacks. Andy’s aunt Susan made them by request—contact her here if you’d like backpacks, totes, diaper bags, clothes—she can make anything. (The boys love their backpacks. Thanks again, Aunt Susan.) 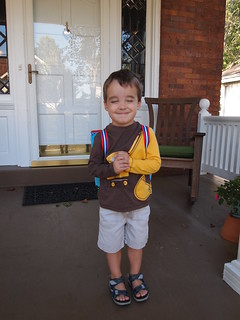 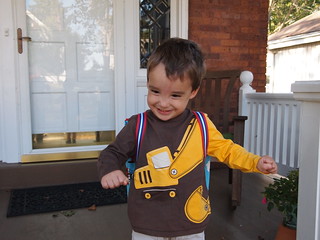 At one point Owen clenched his fists and just stood on our porch shaking his arms—he was so excited. 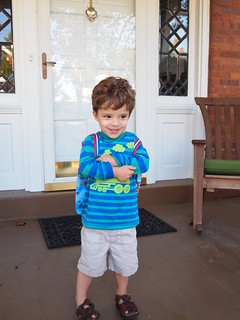 James is (sort of) smiling here only because I was making an absolute fool of myself in our front yard, trying to get him excited/cheer him up.

“Preschool will be fun, James. OK?” Owen said over and over again.

At Country Hills Montessori (the same preschool Sophie went to—the one we fell in love with) we were supposed to kiss, hug and go. Owen knew what to do as soon as he walked through the doors—where to put his backpack, where to wash his hands … Sophie had talked through all these steps with both Owen and James all summer long.

“What should we do?” I asked one of the teachers, who was at his level, holding her arms out to him.

After I peeled his fingers off my wrist.

We heard the sound of his cry all the long walk back to our van.

(Parenting can be hard.)

The first day was only an hour long.

I spent it at Fort Thomas Coffee, with a latte, coffee cake and a copy of Meg Wolitzer’s The Interestings.

I have long designated this future kid-free time as time to work on my freelance projects, excited about the possibility of not editing at midnight. But today, this first day, I designated this time as mine.

And then it was time to pick them up.

Mrs. Richter gave me a thumbs up while helping load another set of twins into a mini van in front of me.

They had done well.

They came out, all smiles and waves, wearing the same clothes I had sent them in, excited to tell me everything—excited to go back.

I thought of the NICU, the times I kissed, hugged and had to go. How hard that was. How hard this was. And then how OK and, ultimately, good it all was, too.

The night before, my parents stopped by for a last summer hurrah—Coney Island, Skyline, Graeters. My mom gave me a gift—a beautiful Liberty print handkerchief, with hand-rolled and hand-sewn edges. (It has since seen some use.) And a card, with this written on it:

Andy: Yes son, it sure does. But don’t the trees seem nice and full?”