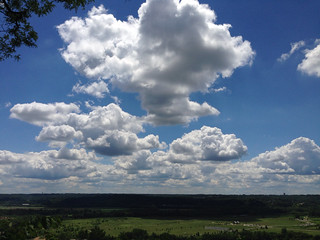 As a writer mom I’m much more likely to tell you about the time I had to carry both screaming boys out of Joseph-Beth, one under each arm, while fellow book shoppers shook their heads than I am about the time everyone sat quietly at a restaurant. I believe stories of my parenting mistakes and mishaps are better reads whereas stories reminiscent of those “my kid is on the honor roll” bumper stickers are simply tedious.

So quickly, today has been a good day. We met friends for a picnic lunch at Ault Park (which is where I took the above picture) and it was a fun and gorgeous afternoon. Later in the day I had to take all three to my eye doctor’s appointment. And they were so.well.behaved. While I was staring at little red lights and reading teeny tiny letters the nurse commented on how well behaved they were and I looked and all three were sitting, silent, just sitting, not moving, not hitting, not whining, not fighting, just sitting. And they stayed that way. The doctor gave them each two Tootsie Roll Pops (one for now one for later he said) and then said to me, “You’re doing this parenting thing right.”

I’m sure he’s forgotten those words by now. But given that I think at least 63 times a day how badly I’m doing this parenting thing, I don’t think I ever will.

I pushed things and took all three to Target and except for one incident over a need (which I tried to explain was a want) for Thomas the Train toothpaste, it was great. They did their daily chore (cleaning the stairs, which is where I put everything that’s downstairs that belongs upstairs) without hassle.

Bedtime was a bit of a disaster (a board game that ended in tears, sneaking—and eating—the newly bought gummy bears, an upturned sprayer resulting in a partially flooded bathroom, one child’s computer privileges gone for tomorrow) but, hey—no one’s perfect.

It’s getting easier. It really is. And the things I’ve been saying over and over and over (and over) are slowly starting to stick. And the real concerns I’ve had about behavioral issues with Owen and James are ever-so-slightly lessening. And so with slight worry that this may sound like bragging (again, I promise to never write on and on about report cards and milestones and homeruns) I will say this: Today was a good day.

“There are good days and there are bad days, and this is one of them.” —Lawrence Welk