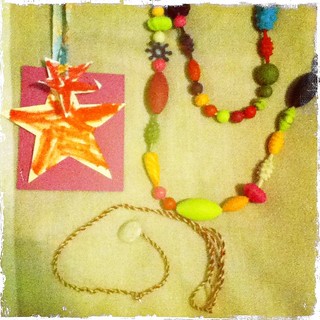 My mother-in-law, Jill, makes beautiful jewelry. During a recent visit to Jill’s house (more on that later), Jill helped Sophie make a lovely necklace. As such, Sophie has been on a necklace-making kick lately. Her creations have included scrap fabric and paper, seashells and twine, and plastic pop-beads. She’s always thrilled with her results and insists I wear her creations, which I do—around the house, at the grocery, at the YMCA for her ballet lesson.

I always wonder what people think, when I’m wearing Sophie’s artwork around my neck. I wish I didn’t care, but when I see another woman staring at the large, plastic pop-beads draped around my neck I want to say, “My daughter made it! Isn’t it beautiful?” as way of explanation. Sometimes I do. And sometimes I just let the woman wonder.

Some things, when your child asks, you just don’t say no to.

This meant James either took the back off, took the battery out, hid it and replaced the back, or, more likely, dropped the phone, watched it break into three pieces, and found the back and replaced it, not knowing a battery needed to be in there as well.

Regardless, I had no battery. I asked James about it. He smiled and said, “don’t know!” Then he and Owen ran around the house like two crazy people, peering underneath everything saying “find battery, mama, find battery!” over and over.

Andy eventually found it. It was underneath a chair. And while putting my phone back together for me something occurred to him. Lately, whenever he calls me, my phone doesn’t ring—it goes straight to voicemail. This has been happening with several other calls, too. So he told me to go to “settings” and then “call settings” and then “blacklist.” There were three numbers listed—Andy’s, my parents’ and Larosa’s—all blacklisted.

I’d like to blame James for this, too. But I sort of remember a little box occasionally popping up while on calls, and I thought the box said “backlisted.” Usually I’d say “no” but I also sort of remember saying “yes” a few times, thinking I was putting these numbers on a back-up-type list. That makes sense, right?

“These gems have life in them: their colors speak, say what words fail of.” —George Eliot

his past Friday my mom, dad, sister, brother-in-law, niece and kids ended up at Skyline Chili for dinner (we were at Mio’s but a severe storm knocked their power out and pretty much everyone in Ft. Thomas’s power out, leaving me unable to cook for everyone). We were all a bit frazzled, hot and wet. But we love Skyline. Even I, still, love Skyline, after having waited tables at various Skyline locations during my high school and college years. My kids love Skyline, seeing as their meals there are basically plain spaghetti, oyster crackers and large quantities of cheese.

We were all packed into a large corner booth when I noticed James standing up, facing the back of the booth, digging through the diaper bag that I had sat on top of the booth, against the wall. He pulled out my keys and tried to drop them between the wall and the booth. I caught them. Then, I noticed my cell phone was gone.

I looked at the crack between the booth and the wall.

The space between the booth and the wall started to ring.

It took five men, including my dad and brother-in-law, to move that corner booth, which is a lot heavier than it looks and is attached to other parts of  other surrounding booths in the restaurant. Basically, all the cooks had to stop cooking to help me retrieve my phone.

We always tip a little extra at Skyline, largely because the nature of the food (crackers and cheese) lends itself to a messy table and floor. This particular night, however, we had to tip a little more.

“Having a two-year-old is like having a blender that you don’t have the top for.” —Jerry Seinfeld