I love this season of innocence. Even when it’s not so jolly. This weekend we cut down our Christmas tree and I was reminded of the look on Owen’s face in a picture I took last December, a picture I now love. 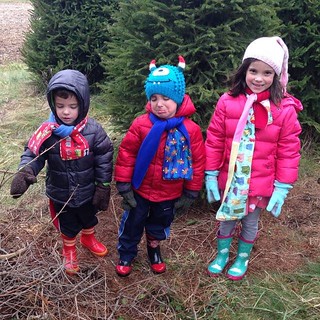 I was reminded of how hard things were mid-December, last year. How un-jolly it all was, during that particular week. And nothing tragic or life-altering happened. Rather, life happened. Sickness. Deadlines. Tantrums. Rejections. And then I was reminded how Christmas, still, ended up being magical.

This week a friend and I briefly chatted over email about the difficulties that come with parenting when so much in the world seems wrong. Bigger wrongs than colds that will end. Deadlines that will result in paychecks. Tantrums that exist because we’re lucky enough to have a child. Rejections that happen because I was able to write some words on a page. But it’s hard to appreciate the beauty of the holidays when beauty is so very much lacking elsewhere. So many elsewheres.

But kids, they make it easy. Easier.

They make it harder, too, yes, but mostly easier.

This week we decorated our too-big Christmas tree (if you turn sideways you can walk from our entry into our living room). And when we were nearly done, I looked over to see Owen sitting on the bottom step of our staircase, staring at the tree with the most content smile on his face. His eyes reflected the tree lights like something out of a Hallmark special. All was right in his world. All was bright. Despite.

I know Sophie knows about Santa. She doesn’t know I know. She’s not ready. She’s guarding the knowledge tight in her fists, much like she does when she hunts for fairies. She’s unwilling to let go.

At first, this bothered me, She’s 7. I had it all figured out at 5. In one fell swoop I learned about Santa, the Easter Bunny, and the Tooth Fairy. The sadness was slight, that of a soft sigh. And then I relished in knowing a secret my siblings did not. I felt grown-up.

The boys drill me about Santa constantly. “How does he get down our chimney if it’s closed up?” “How does he sneak around the hallways of apartment buildings and hotels?” “What about kids who don’t have a fireplace?” “If books say Santa goes all over the world then what about people who don’t celebrate Christmas? How is he going all around the world if many people in other parts of the world don’t celebrate Christmas?”

I half-answer. Change the subject. Wish they would just come out and ask, “Is Santa real?” And when they do I plan to answer as my parents did. “What do you think?” I’ve learned that coming to conclusions on one’s own always softens the blow.

But no one asks. Not the boys. Not Sophie. Sophie doesn’t even ask questions about the Big Man anymore. She answers the boys’ questions. She has an answer for everything. She’d scream his reality from the rooftops if she could. And so I let her. That is her realization to come to. Not mine to take. At least, I hope that’s the right thing to do.

And when they know, they all know, and they know that I know they know, I’ve learned this: I’ll still find magic. Because even with all of our life’s little wrongs and the world’s big wrongs, there’s so much magic, and innocence, during the holidays. 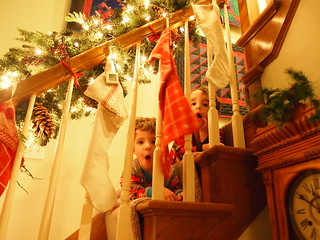 There’s the taste of bacon-wrapped chestnuts and buckeye candies and fancy cheeses we don’t normally buy and champagne. There are candles and white lights and colored lights and twinkly lights and just so much light. There are thoughtful gifts, homemade gifts, the gift of time spent with those we love. There are three kids singing the wrong words to Christmas songs while I play on our out-of-tune piano, rusty in my memory, missing notes. There are messes. So many big, beautiful messes. Christmas cookie-making messes. The mess of pine needles everywhere, always, no matter how often we water the tree. The mess of wrapping gifts in brown paper and decorating them with stickers and markers and glitter pens. The mess of making a quadruple recipe of Chex Mix and the mess of addressing too many Christmas cards and the mess of extra coffee cups in the morning when family comes in from out of town. And with those messes come the hugs. So many hugs. Great-grandmother hugs. Grandparent hugs. Sibling hugs. Aunt and uncle hugs. Parent hugs. Cousin hugs. Niece hugs. Husband hugs.

So during the holidays, I let in cheeriness and maybe even a little cheesiness. I let in some make-believe. I let in some sappy moments despite the realities both at home and out in the hard, beautiful, cold and light-filled world. I let myself soften while watching a little guy sit on the steps and stare with a small smile at a decorated tree. I let another little guy question me incessantly about the logistics of Santa’s big night. I let a 7-year-old think that I think she still believes.

“Christmas waves a magic wand over this world, and behold, everything is softer and more beautiful.” —Norman Vincent Pe