We know so little when we’re young.

I don’t remember the family’s name. I don’t even remember the boy’s name. But I remember babysitting, as a young teenager, in the summer. The boy had been practicing riding his bike without training wheels with his dad. And he was excited. So very excited. He asked if I could practice with him. “Sure!” I said. I remember the look of concentration on his face. I remember that he was wearing a helmet. I remember that I held onto the back of his seat and then … I remember letting go. And he rode. Around the cul-de-sac. By himself. Without falling. I remember cheering him on, and I remember his joy.

The boy was asleep. I told them, so excited to share that joy with them. The dad’s face fell. And then I realized: That was his thing. That moment belonged not to me and the boy, but to the boy and his dad—the dad who had spent days working with the boy, building up to that bittersweet moment of letting go.

The dad was kind, and proud, but still silently, yet clearly, upset he hadn’t witnessed the moment himself. And I felt terrible.

I now understand why daycare workers and babysitters share in a parents’ excitement about a rollover or a first word or a first step even though they had already witnessed it, and with thought and grace chose not to share, instead giving that moment to the parent.

I’ve never been good about recording firsts. Numbers, dates. I like to write words instead. Turns out this has been a bit problematic when filling out hospital forms. When asked about firsts I tend to put a lot of question marks. On the last form I was given, exasperated, I simply wrote “the first six months were a blur.”

But that doesn’t mean I don’t love them, those monumental firsts.

I’ve been lucky to witness many, and I’ve missed some. I was in Chicago when Owen took his first steps. I was waiting with girlfriends for the L when I heard the ping of my email and saw the video Andy had sent. And I was grateful he witnessed it. It was his turn. 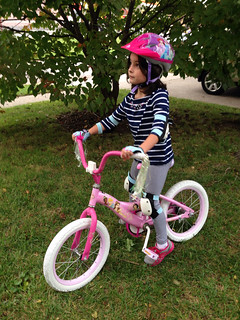 Sophie has long loved her scooter. She’s fast and meticulous with her steering and can brake like a pro. As such, her bike has spent the last two summers on the porch, mostly unused. But lately we’ve been talking about getting her on it again, and taking off the training wheels. Friends lent us a scoot bike, as an aide. And after practicing with the scoot bike for awhile, last weekend, she asked Andy to take off her bike’s training wheels. 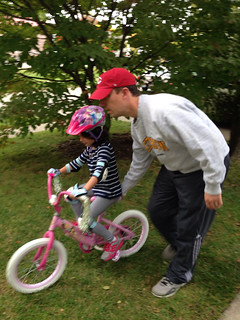 I now understand the pride of the dad of the boy I babysat so many years ago. And the disappoint in not being the one, after days of practice, to finally let go. And I was so happy both Andy and I were able to witness Sophie’s fearful-yet-brave wobbling this weekend.

Drivers on our street slowed down and waved. Friends yelled “Go, Sophie! You can do it!” while swinging on tree swings in their front yards. The neighbor across the street said it didn’t seem so long ago when she was doing the same with her boys, who are now in their 20s.

I’m sorry, long-ago dad, for taking that moment from you.

I was young and unknowing, but I get it now. Even if I may not mark it in a baby book or the calendar, I get it.

“The hardest part of raising a child is teaching them to ride bicycles. A shaky child on a bicycle for the first time needs both support and freedom. The realization that this is what the child will always need can hit hard.” —Sloan Wilson