Sophie has reached the age where, every single day when I pick her up from school she asks, “Am I going on a play date? Can I have a play date? Is someone coming over? It’s been SO LONG (meaning three days) since I’ve had a friend come over!” and on and on. She goes on play dates now. She has friends over. She loves this.

Of course, the people coming over are her age—her friends. And while she is, honestly, very gracious and patient and sharing with Owen and James, all bets are off when she has a friend over. They scurry up the stairs and shut her bedroom door—no boys allowed. I allow her this, though. For when she plays with her pop beads, for example, with the boys, the game typically involves the beads being tossed about her room. But when she plays pop beads with her friends, for example, without the boys there, she actually gets to make things. She deserves this.

But still, I sometimes feel sorry for James and Owen, left outside a closed door, upset they can’t get in. But a couple weeks ago, they got a surprise—Sophie’s friend Madeleine’s younger brother, Jack, came for a play date, too. 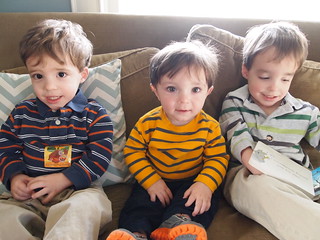 The boys loved it. They loved having someone for themselves. 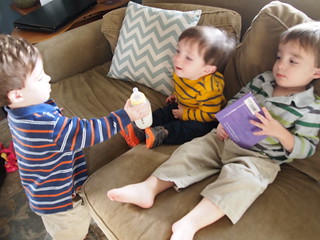 They also loved that this someone was younger than them (being that they’re the youngest in our house). Owen read books to Jack, over and over, and James tried to give Jack his bottle, over and over.

It almost made me wish they did have a younger sibling to interact with.

“The most I can do for my friend is simply be his friend.” —Henry David Thoreau