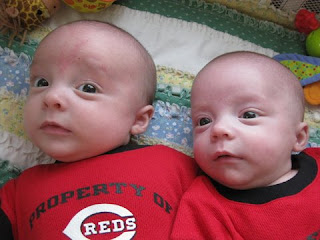 People often ask us if Owen and James are identical or fraternal twins. I typically say fraternal but the truth is, I don’t know. They’re both boys. They both have the same blood type. And the placenta analysis came back as “indeterminate.”

They always have looked different to me but that’s mainly because of size. Owen, since birth, has been considerably larger than James. So of course noses and cheek bones and lips look different but is the difference just that one is “fuller” than the other? But still, I see differences. James, for example, has lighter hair than Owen does.

But every once in awhile a picture like the above comes along.

Fraternal, most likely. Brothers? Most definitely.

“You can spend too much time wondering which of identical twins is the more alike.” —Robert Brault