After our second miscarriage in April 2007 I thought I would go crazy with the everyday because the everyday seemed in every way wrong. I knew what was ahead of me—days of coming home from work and sitting on the couch, sometimes crying, sometimes numb. In desperate need of an escape and not wanting to repeat those long evenings Andy and I booked a trip to San Jose del Cabo on a Wednesday and left the following Saturday. It was, perhaps, the most spontaneous thing we’ve ever done. For four nights and five days we drank rum and Diet Coke, watched pelicans skim the ocean and played Scrabble, the Spanish version. 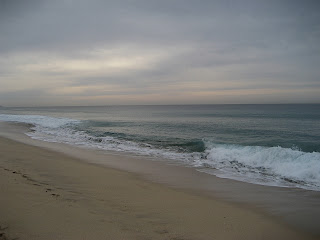 On the last morning I got up early to search for a couple more pieces of sea glass before leaving our beachfront resort. An old woman, dressed all in white except for the shawl draped across her shoulders, approached me with bathing suit cover-ups for sale. She spoke little English. “No,” I said. “Gracias.” Then she pulled out child-sized cover-ups. “For your baby,” she said. “No,” I said again. But she was insistent. Over and over again, despite me shaking my head and wondering what “I don’t have a baby” is in Spanish, the old woman repeated those three words: “For your baby, for your baby, for your baby.”

A few minutes later Andy, who had been showering, came up behind me and wrapped his arms around my waist, only to discover I was crying. The woman was gone.

Maybe it was coincidence. Maybe the woman sensed the pregnancy that, physically, was no longer there. Maybe, in a way I can’t begin to understand, our meeting was the world’s way of telling me someday I’ll have a baby to buy a beautiful beach cover-up for while vacationing in Mexico. Maybe she just assumed I had a baby, because I was a woman of child-bearing age, and maybe she pressed the issue simply so she would have money for lunch. I don’t know. I’ll never know. 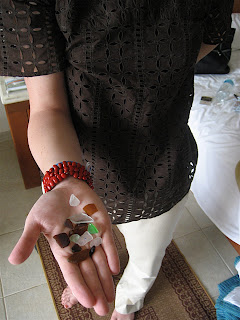 But I kept that sea glass. My mother-in-law, who makes beautiful handmade jewelry, wrapped some of the pieces for me. I now have two necklaces and two pairs of earrings. I wear them often. And I think about that old woman dressed in white on the beach. I think about those long evenings on the couch. I think about the pelicans and the cacti and the water, too rough to swim. And I think these things while taking a walk with my daughter on a cool September evening, fingering the wire-wrapped glass resting against my skin. I think about life, about moments, and how sometimes, it takes a little tumbling to turn something ordinary, and perhaps even ugly, beautiful and smooth.

“By the time I’m done collecting for the day, I know I’ve amassed a basket full of time if only it could tell its story.” —Leasa Garvin